The Lipscani and Gabroveni Halls

The exhibition presents a series of examples connected to the history of exhibition spaces in Bucharest, but views the concept of the exhibition in an extended sense, bringing to light both the conventions of classic exhibition spaces, belonging to public or private museums, and the domestic space of private collections or the public space of Bucharest’s parks, where statuary and nature have occasionally produced memorable conjunctions. The Simu and Toma Stelian museums, the National Museum of Art, and Salla Dalles, as well as the exhibition facilities of Carol Park, from the interwar period to much later, are a number of examples of a rich cultural history. This panorama, which in no way claims to be exhaustive, points to the various declinations lent to the exhibition format, which on the local context is more often than not currently understood and practiced in a conventional way. The selection of photographs from the Mihai Oroveanu Image Collection is proof of the fact that the history of exhibitions in Bucharest is a provocative field of study, a history that should be thoroughly researched because it is capable of revealing the complex web of conditionalities that make a given exhibition proposal a manifestation of the historical moment in which it arises, whether we are talking about initiatives from the public or the private sphere. Likewise, a deeper investigation of the subject might also make visible the fact that the history of art is inextricably linked to the history of exhibitions, to the way in which the prevailing taste of a period and the status of certain artists are constructed via leading figures and key exhibition spaces which have shaped the course of historical narratives that are worth re-analyzing and questioning today.

The event is organised by the Bucharest Municipality through ARCUB, with the support of the Salonul de proiecte Association.

Tickets can be purchased online from arcub.ro and bilet.ro or from the ARCUB box office (84 – 90 Lipscani).

In 2018 Salonul de proiecte started a process of valorization and multi-directional exploration of an important photographic collection which belonged to Mihai Oroveanu, a noted photographer and art historian, and also the former director of the National Museum of Contemporary Art in Bucharest. His lifelong interest in photography sparked the impulse to gather and often rescue from disappearance or irreversible degradation troves of photographs, in all supports and formats, putting together one of the most profuse collection of images in Romania, that covers a period between mid-19th century to the end of 20th century. 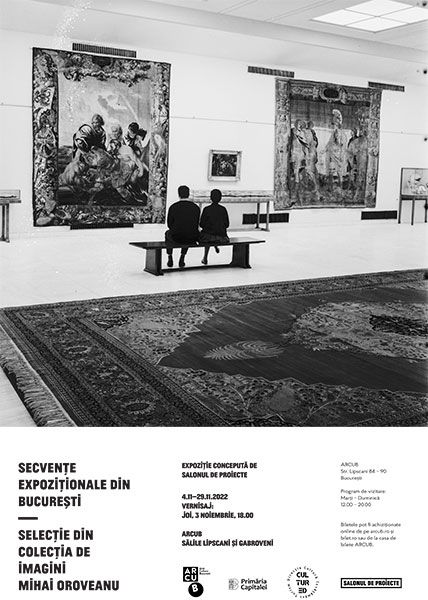