Salonul de proiecte invites the public from Timișoara to an exhibition which started as a reflection on the emblematic space in which it has been housed for six years: the former Universul printing house in Bucharest. Universul has a venerable history and came to be the most popular newspaper and press trust of the interbellum; it devised innovative means of production and diversified both the content and distribution of the publications printed under its umbrella. Its printing house was the first in Romania to introduce the rotary printing machine to allow rapid printing and increased numbers of copies. Likewise, Universul was a significant example of the imbrication of press and politics, both in its ideological position and the controversies it gave rise to in society, adopting partisan positions and exacerbating conflicts in the public space. Salonul de proiecte has always shown an interest in questioning subjects relevant to the social dynamics and politics of the present, often setting out from elements that circumscribe its position on the cultural stage, but also within the framework of a wider system of affinities and dependencies accumulated over time. This exercise in self-reflection conjugates in the present case with a subject of the greatest urgency and topicality: the circulation of images and words in media spaces and its repercussions on everyday life. Disinformation, manipulation of information, propagation of fake news, the constant flux of news have altered our relationship with reality and our trust in the representations circulated by the media. The press as an institution no longer represents a stable or trustworthy reference point, and citizens come to adopt for themselves the role of investigative journalist, researching multiple sources, checking the channels by which information is disseminated, in order to reach an image of reality that is as little distorted as possible. In fact, such methods of investigation are not radically different from certain types of artistic research that adopts the role of questioning the subterranean mechanisms that shape current society.

Inviting contemporary artists to produce new works, specially conceived for the present exhibition, Salonul de proiecte has attempted to bring to light new ways of imagining the relationship to these complicated givens of the past and present, without acting prescriptively on the directions or methods chosen. Irina Botea Bucan and Jon Dean have chosen to explore the history of the Universul building, which continued to function until relatively recently as a printing house, focusing their attention on the experiences of the people who worked there. The film they have produced makes an essential contribution to the memory of the site, which in recent years has been caught up in an aggressive process of gentrification that monopolises the whole area. Irina Gheorghe, Larisa Sitar and Natasja Mabesoone turn their attention to the graphic design of magazines from the first half of the last century, choosing to print using various techniques works composed of visual material extracted from these sources. Irina Gheorghe focuses on the printed word that encapsulates the ‘typographic sensibility’ of an age, making the word autonomous and abstract in order to short-circuit language and meaning; this transformation puts forward new and unfamiliar codes of reading that lend the capacity to convey printed messages a new dimension. Larisa Sitar and Natasja Mabesoone insert themselves within the core of current questioning of the condition and role of the press, against the backdrop of the continual erosion of democracy all over the world. They conceive a limited edition of T-shirts and posters that will be put on sale to support local investigative journalism projects that have escaped control and instrumentalisation. For Nicoleta Moise, artistic and journalistic practice occasionally intersect, particularly through the use of certain research and documentation techniques specific to both. She proposes various hypostases in which the similarities and differences between them are thrown into relief within the framework of a public arena of discussion. Mona Vătămanu and Florin Tudor do not resort to a contextual reading of the press, past or present, but choose to speak of the way in which subjectivity is almost entirely shaped by the flux of messages we now perceive day after day, hour by hour. Taking into account the universal inability to draw any positive meaning from this condition, they nonetheless allow that there still exists a remainder of humanity, empathy and solidarity that cannot be obliterated.

The works were first presented in an exhibition organized during the summer at Salonul de proiecte, being completed and reconfigured for the current iteration of the exhibition. The artistic contributions are being linked to new productions resulting from the workshop UNIVERSUL FALS: Creative Writing / Fanzine Making which took place this September at Centrul de Proiecte, Timișoara. The workshop drew a large number of participants from the local community and was organized in collaboration with The Secret Garden Bookshop, an entity with a long-term engagement in the field of experimental publishing. The workshop was coordinated by Florin Fâra and the working sessions were led by the tutors Ana Kun, Vasile Leac and Sorina Vazelina.

The title of the exhibition, The Cipher of the Vast Planetary Rumour, takes up a phrase made famous by interbellum journalist F. Brunea-Fox, who believed that in its noblest incarnation, press reporting was able to provide a privileged key for understanding reality and had the power to transcend place and speak to humanity from a universal perspective.

This event is organised by the Salonul de proiecte Association as part of the project Media and Publishing: Between Investigation and Artistic Research / Image, press, and public space. 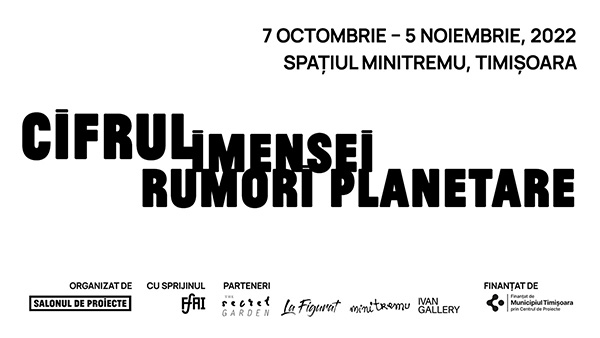