The present exhibition looks more deeply at the locus in which the Salonul de proiecte operates, the former Universul printing house, by combining historical materials able to shed light on the tumultuous interbellum period, when the press played a major role, placing the emphasis on the two press trusts that were based in the ‘journalistic quarter’ bounded by Strada Brezoianu and Strada Sărindar (now Strada Constantin Mille). Under discussion is the Universul mass-readership daily, which, alongside connected publications, adopted a right-wing ideological stance, promoting an aggressively nationalistic policy, while on the other side of the political spectrum was positioned the press conglomerate that published the Adevărul and Dimineața dailies, which had a pronounced left-wing commitment, tackling a broad range of topics that placed social critique and equality at the fore. The exhibition sets out from the premise of the political conflict between the two press trusts, but above all else seeks to encourage reflection on the print medium in itself, on the type of labour that this enterprise entailed, an enterprise that brought together multiple talents and trades, throwing into relief aspects to do with the evolution of technology and specialisations in the print sector, the circulation of images, the infrastructure and culture of journalism. Many of the political conflicts and much of the same questioning of the status of the press from that time are also articulated in the present.

To compose as revealing an image as possible of all these phenomena it was necessary to carry out extensive historical research, whose results bring to the public attention a comprehensive selection of original drawings and engravings from the collection of the Romanian Academy Library, made by some of the best-known press illustrators of the interbellum, names all but forgotten today, such as Vasile Dobrian, Mihail Gion, and B’ARG (Ion Bărbulescu), as well as famous figures such as Aurel Jiquidi, Camil Ressu, and Nicolae Tonitza, who can be found here in a less familiar guise. Alongside the graphic journalists, the exhibition also includes a substantial selection of press photographs, which presents, among other things, notable examples of the photoreportage genre, which took off in the interbellum and was skillfully practiced by the likes of Iosif Berman, a prolific and diverse photograph with a strong social conscience. However, the circulation of press photographs and illustrations is most eloquently thrown into relief by the newspapers and publications themselves, which placed the images in conjunction with the discourse and identity that they assumed. Besides examples from Universul and Adevărul, the exhibition also presents landmark publications such as Cuvîntul Liber and Facla, which, besides their radical leftist cultural and political direction, also produced singular conjunctions between graphic design, text, and image.

The title of the exhibition refers to a remark made by the avant-garde writer Ion Călugăru in the Integral magazine about the way in which Tudor Arghezi described the press and the craft of newspaper production as a metaphor for the human existence in relation to the cosmic one.

Artworks and materials from the following collections: The Romanian Academy Library, The National Library of Romania, The ‘Sever Bocu’ Press Museum in Jimbolia, The Cristinel Popa Collection, The Mihai Oroveanu Image Collection

This event is organised by the Salonul de proiecte Association as a part of the Journalistic Nature of Existence. Typography, Labour and Public Space / Image, press, and public space project with the substantial contribution of the Romanian Academy Library. 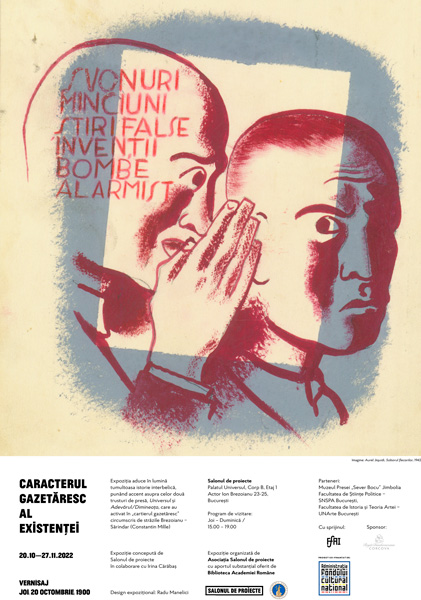