This presentation borrows both its title and modus operandi from a 1961 sculpture by Robert Morris. Something of a ventriloquist object, Morris’ Box with the Sound of Its Own Making is a modest wooden box, inside which a tape player continuously reproduces the sounds of its fabrication: a 3-hour process of sawing, drilling and nailing. Box with the Sound of Its Own Making is understood here as both image and narrative of manufacture, film still and soundtrack – as an object whose coming together is described in two distinct systems, or placed at the intersection of different timelines. Its identity is both demonstrated and looped into the past of its construction, as much as into a future where it is endlessly achieved. This might be the correlate, material and abstract, of a biography, an account of the affirmations and hesitations, exclamations and retractions, impersonations and personifications that make the dynamic of selfhood. The presentation imagines a subjectivity narrating its own emergence and re-composition between insides and outsides, makeshift screens and vibrating partitions, between projection, reflection and echo. This self arises as a sequence of preambles and postscripts that demarcate its imagined plenitude.

The space where these movements and operations are cut and re-edited is an object designed by artist Philip Metten, positioned between the categories or tropes of architecture and sculpture, resembling a scale model for a cinema as much as the enlargement of the bowels of an old photographic camera. Metten’s Cinema is object and place, exhibit and scenographic element, spatialized viewfinder and built zoom, to be either collapsed between its two surfaces of inscription, or telescopically extended to fit a given space. This structure will accommodate the three episodes of a screening program, each preceded by a lecture-performance.

The video works and artistic practices in this part of the program produce a conversational dynamic between narratives of transformation both cinematographically unfolded and conceptually interrogated, ranging from the intimate urgency of an encounter between filmmaker Phillip Warnell and philosopher Jean-Luc Nancy, whose experience of a heart transplant breached his sense of an interior space, of anything that could be held as “one’s own;” or the idiosyncratic mode of address in Laure Prouvost’s handling of digital means, harking back to the invention of cinema and the anxieties of its first spectators rather than leaping towards trans-human horizons; or from Josef Dabernig’s humorously bureaucratic ‘making-of’ where film comes into being via disciplining the physical body and an exercise of surveillance, control and assessment that produces, recursively, the very screenplay of the work we watch, to Fabien Giraud and Raphaël Siboni’s singularly ambitious project The Unmanned, an 8-episode (from which 3 will be presented) history of computation, intermingled with medieval superstitions, colonial conquests or technological golems, and delineating the ampler fiction – and patient invention – of a non-self, of a domain from which the human is to be removed or abstracted.

The project also includes photographic works by Geert Goiris, a tapestry by Susanne Kriemann, and documentation of performances by Fabio Mauri and Phillip Warnell, which could be understood as interchangeable ‘posters’ for the ‘film’ whose sound emanates from the exhibition. Mauri and Warnell, for instance, articulate expanded or compressed cinemas where the screen for the projection of a film is placed on the torso of the director in one case, or directly on the retina of the performer. In both cases, screens function not as neutral surfaces but as fragments of conjunctive tissue, mediators in other proximities than those of conventional cinema, embodied receptors whose folds, irregularities and patches of obscurity inflect the viewing experience as much as filmic narrative. 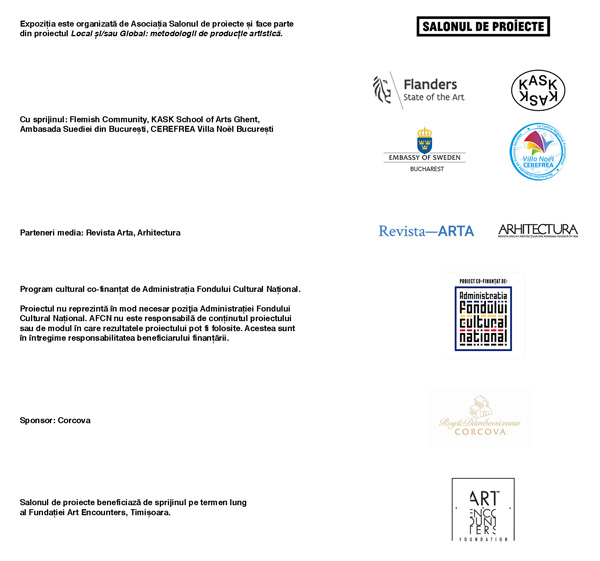