Salonul de proiecte opens its new exhibition season with an invitation to dialogue that brings face to face artists Dan Perjovschi and Cristian Răduță, extending a working format whereby artists from different generations are invited to produce an exhibition together. Such forms of interaction have hitherto not unfolded within a rigid framework, and in this instance it was Dan Perjovschi who chose to collaborate with Cristian Răduță. The structure of the exhibition makes visible the tension between two registers: on the one hand, the reality of everyday life, and on the other, the humour-infused imaginary that arises in those moments when the everyday suffers a short circuit.

As his raw material, Dan Perjovschi employs newspaper, which he incorporates into his practice, altering it in various ways; he is interested in both the materiality and the content of newsprint, which rapidly goes out of date. Perjovschi incisively comments on the current realities of the contemporary world, constantly hijacks and re-contextualises the events that make up the horizon of the present, revealing their significance and reminding us of our need to engage as citizens. For Dan Perjovschi, newspapers are a medium with which he has been involved directly since 1991, when he began contributing to Revista 22, a platform via which he communicates (producing projects for and from newspapers), from which he draws ideas, and which he utilises physically, as a working material in various types of installations and artist’s books. Another way of working with modest materials drawn from everyday life can be found in the practice of Cristian Răduță, who incorporates into his sculptural objects waste materials such as polystyrene, paper, plastic, or tin. The result is a type of bricolage-sculpture, which, on the one hand, contains references to the utopia of space exploration and the failures inherent to such ambitious enterprises, and, on the other, concretely evokes the space junk that will orbit the Earth forever. Another feature to be found in the practice of both artists is humour: Dan Perjovschi draws on a direct, acidic kind of humour, while in the work of Cristian Răduță the humour arises from the discrepancy created between the grandeur of plans to “conquer” space and the poverty of the materials the artist employs.

Dan Perjovschi (b. 1961) is one of the most critically acclaimed Romanian contemporary artists, his international career spanning more than 30 years. In his drawings, he discusses contemporary social and political issues in a subtle and ironical manner. His numerous solo and group shows were held at prestigious institutions like MoMA (US), Kunsthalle Basel (CH), Kiasma (FI), Reykjavik Museum of Art (IS), Van Abbe Museum (NL), Tate Modern (UK), Para/Site Art Space (HK), Moderna Museet (SE) among others. Among the most important art prizes he received are George Maciunas Prize (2004), ECF Princess Margriet Award (2012, with Lia Perjovschi), and Rosa Schapire Art Prize (2016).

Cristian Răduță (b. 1982) lives and works in Bucharest. In 2016 he co-founded Sandwich art space in Bucharest. His artistic practice includes sculptures, objects and installations that start from hypothetical, sometimes absurd situations and characters, which are humorously employed. In his works, he is interested in the relationships and tensions that form among the various industrial and bricolage materials he uses. He exhibited at Museum of Sculpture at Królikarnia Palace, Sandwich Bucharest, ElectroPutere Gallery Craiova, MNAC Bucharest, among others. 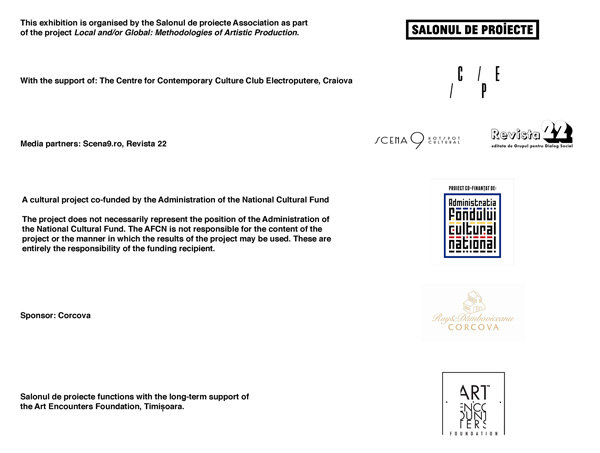