The present exhibition is the second event in a series organised by Salonul de proiecte, which sets out from the work of Konstantin Tsiolkovsky and takes shape around the dialogue between the installations specially produced for this occasion by Ralo Mayer and duo Silvia Amancei/Bogdan Armanu.

The title of the exhibition refers to a term employed in order to imagine the Earth as a closed system and to draw attention to the dangers of exploiting the planet’s (limited) natural resources (R. Buckminster Fuller is among those who contributed to establishing the term, in his 1968 book Operating Manual for Spaceship Earth). Whereas in 1961, Stanisław Lem’s Return from the Stars introduced us to the image of a utopian society that an astronaut finds difficult to understand or accept on his return to Earth after a space voyage of 127 years, in the present we continuously take part in and perform an impossible return to a space swept by deviated trajectories and broken futurologies, contorted by fake nosedives, to an Earth that is no longer either the Earth or the Blue Marble. The strange Marsification of today’s Earth is occurring at a far greater rate than the plan, hatched by the elites seeking self-preservation in space, to colonise the Red Planet. What not long ago was unfounded speculation, sci-fi rigmarole, in the days of Star Trek banned activity (by the directive of non-implication and non-terraforming), is happening right here, right now, in the back yard of the galaxy. Today, a cosmonaut returning home after hundreds of years would be perplexed to find a world that has become uninhabitable and almost unthinkable, no matter how great the processing power or computational prefiguration of the late Capitalocene might be.

The installations presented in the exhibition explore complex territories, combining features drawn from pop culture with reflections on acute problems of the present, such as ecology and sustainability or the (im)possibility of changes at a social level. Ralo Mayer puts forward correspondences between experiments of life in space and concepts of life on Earth, between the imagining of space colonies and hallucinogenic experiences in the San Francisco Bay Area of the 1960s and 70s, between anthropocentrism and machine intelligence/artificial nature. He draws on classic representations of sci-fi culture: the astronaut, the robot, the alien – to be found in cult films such as Silent Running and E.T., even making use of the hyper-reflective material that creates the astonishing effects in Douglas Trumbull’s film, in which he discusses the new ecologist ideologies of the hippie era. Silvia Amancei and Bogdan Armanu experiment with DIY stage sets in order to meditate on narratives of the past and the uncertainties of the future, in a constant attempt to avoid the trap of nostalgia. Their contribution has a pronounced textual component, in which speculation, poetic constructs, and irony combine to generate a type of subjective knowledge that has the potential to influence the way in which we perceive the surrounding world. The artists become engineers of the possible and construct scenarios in which the projects of the socialism of tomorrow might be debated in the setting of a medical clinic, against a backdrop where the authority of reality and the alien element are able to reverse roles.

Silvia Amancei & Bogdan Armanu (b. 1991, RO) are an artist duo living and activating in Iași. Working within the conceptual framework of transmedia and having a background in fine arts, mural art (Silvia) and painting (Bogdan), they are trying to transgress the physical and discursive borders of the object (and of the labour inscribed in it). Working together since 2012, the two artists have produced a series of projects focused on exploring, analysing, deconstructing and decomposing what they consider to be the new paradigm of life – exploitation. Ralo Mayer (b. 1976, AT) is an artist living and activating in Vienna, presently teaching at the Department of Site-Specific Art, University of Applied Arts Vienna. His works delineate “ecologies of contemporary history,” exploring the relation of nature and society as a collapsing dichotomy. Objects like space shuttles, artificial ecosystems, the everyday life of post-Fordism, and digital cultures interweave into meshes of past futures and today’s Science fiction, which Mayer translates into cross-media ensembles of installation, film, text, or performance.

More details on the first event dedicated to the work of Konstantin Tsiolkovsky:
https://salonuldeproiecte.ro/news/outside-the-pale-blue-dot-beyond-the-planet-earth/ 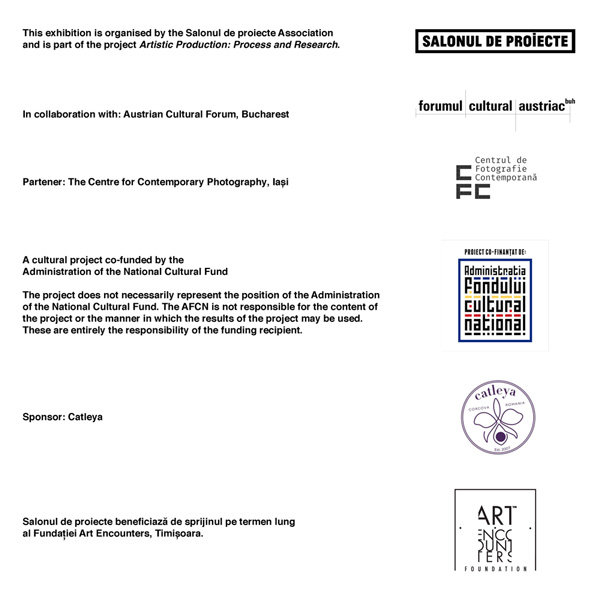