The present exhibition took shape gradually, arising from another exhibition, Situation and Concept, organised by Decebal Scriba and held in Bucharest in 1974. As a participant and coordinator, Decebal Scriba not only documented the exhibition and preserved some of the works exhibited therein, but also interpreted works and letters received from the artists, materials that allowed a partial reconstruction of a collective mood and working climate in which the vitality of ideas and the desire to experiment dominated the conversation about art. The documentation surrounding the exhibition in question provided an opportunity to investigate an episode in the history of Romanian conceptualism from the viewpoint of the connective networks and exchanges of ideas that brought together a nucleus of artists. Other exhibition contexts are also invoked, such as the former New Gallery, the gallery of the Generative Art Group in London, and the Paris Biennale of 1971.

In the vocabulary of the exhibition, the works combine with a rich adjacent material—letters, maquettes, photographed actions, documentary photographs. Another component is the emphasis placed on artistic research, on the imagining of works that in the majority of cases did not come to fruition. In addition to the extensive contributions of artists such as Horia Bernea and Decebal Scriba, the participants in the Situation and Concept exhibition, a number of early actions initiated by Iulian Mereuță are presented, as well as the correspondence of Jindřich Chalupecký, the Czech art critic and promoter of a pan-European conceptualist movement. Also included are projects, installations and actions by Ilie Pavel, a mentor of young artists of the time, and a work by Mihai Olos, submitted with a dedication to Decebal Scriba after Olos had seen the Situation and Concept exhibition. Although by then he had left the country, Paul Neagu was also part of the same circle.

The lasting friendships, which endured long after some of the abovementioned artists left the country, and the artists’ need to communicate despite political and geographic obstacles ultimately constitute the substance and driving force of the exhibition, one that is intended to be read as open research. The network is capable of expansion, and subsequent research will bring the required deepening of our knowledge of this historic segment of contemporary art.

This exhibition is organised by the Salonul de proiecte Association and is part of the project Artistic Production: Process and Research. 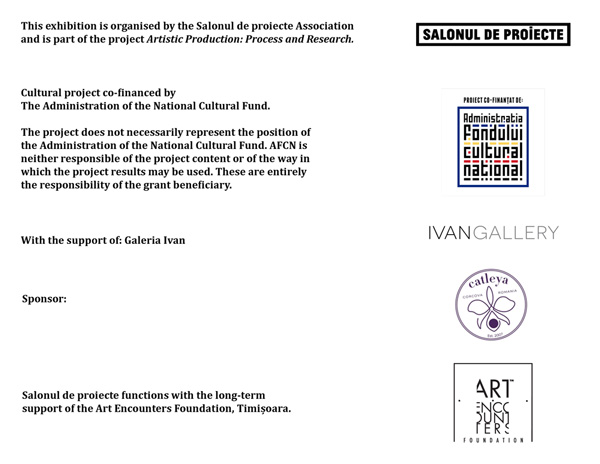