“The map is not the territory.” (Alfred Korzybski)


This exhibition is part of a larger strategy undertaken by Salonul de proiecte since 2011 to support the younger generation of artists. Whereas up until 2016 a series of open calls resulted in eight exhibitions showcasing new works produced specifically for the occasion, this time the collective Aici Acolo was invited to make a proposal aimed at engaging a community of emerging artists active in several of Romania’s artistic centres.

Part of the on-going Maps and Mapping: Cartographic Tools and Practices project, which tackles contemporary artistic practices of mapping, the exhibition goes beyond conventional signs, metrics, and particular placements to look at geographies that can be addressed critically and subjectively. The works featured in the exhibition reflect various approaches to the processes of mapping, whether to do with personal histories, the intricacies of the body, economic difficulties, real/fictional spaces, invisible traces, or merely ways of re-narrating erstwhile fragments of histories. Geographies may fluctuate depending on how we make sense of the here and now, simultaneously localising and delocalising. How do we understand our present-day spatial situation? From grid references to the plotting of current positions, we map the spaces (both real and mental) we traverse in order to navigate our socio-political, emotional or imaginary states. Useful in making sense of the world, every map is someone’s way of getting you to look at the world as he/she sees it.

The exhibition is connected to a series of three workshops conducted by Régine Debatty and Joana Moll at the Paintbrush Factory in Cluj, Răzvan Anton at the Romanian Academy Library in Cluj, and Lia Perjovschi at the Astra Library in Sibiu. The workshops focused on various artistic strategies of mapping: the investigation of cultural networks as they relate to cultural and everyday politics, the production of knowledge and how we visualise it, as well as the understanding of the ecological, social, and cultural impact of technology. These topics prompted discussions and critical reflections that bridged ideas between the young artists who took part in the workshops and went on to produce new works for this exhibition.

Aici Acolo is a collective of young artists and curators based in Cluj who reactivate unused/abandoned urban spaces by transforming them into temporary art spaces for showcasing emerging practices. The project Maps and Mapping: Cartographic Tools and Practices marks the first collaboration between Salonul de proiecte and Aici Acolo, featuring workshops and pop-up exhibitions that support artistic projects at every stage of production, from the development of ideas to production and presentation.

This exhibition is part of the Maps and Mapping: Cartographic Tools and Practices project, organised by the Salonul de proiecte Association in collaboration with Aici Acolo. 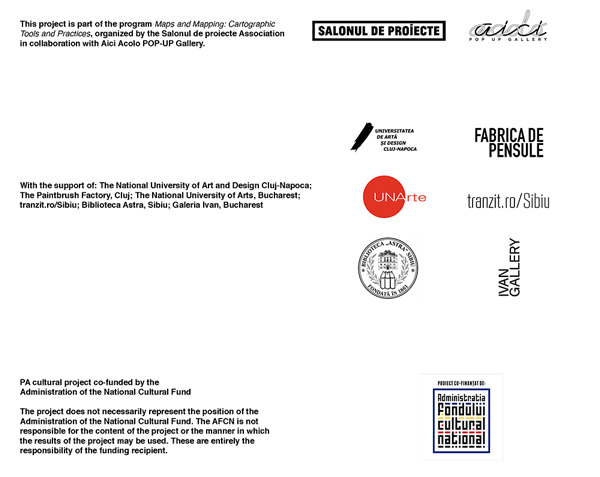