Launch of the Images and Words in Circulation: A Critical Approach project, with Alexandra Croitoru, Magda Radu, Ștefan Sava

We invite you to the first public event in the Images and Words in Circulation: A Critical Approach project, an initiative that proceeds from the siting of the Salonul de proiecte space in the erstwhile Universul printing house and aims to bring into discussion various levels of the evolution of the press phenomenon: on the one hand, the dimension of artistic research is mobilised, as will be visible in a future exhibition, and on the other, the specific register of the public discourse reflected in the current media is the subject of a workshop run by independent media researcher Adina Marincea, which has unfolded over the previous weeks.

The present event brings together some of the workshop participants, who will share their experiences of working together over the course of a number of sessions, as well as the personal research directions they have taken during the workshop, which focused on disinformation phenomena such as 'fake news', online political propaganda networks conspiracy theories, and the polarisation and radicalisation of opinion as a result of the fomenting of hate speech.

The project throws into relief the intersections between artistic research and methods of investigation specific to online media, constructing an extended field for reflection that has the potential to produce a hybrid type of knowledge which can be configured at the boundary between the two.

Image: Wordcloud with the most widely used words in Facebook posts related to labour unions in 2018 in Romania, by Sergiu Nisioi.


Adina Marincea is an independent researcher involved in local feminist and anti-authoritarian movements. She has more than a decade of experience in social sciences research projects, specialising in media studies. She is the author of articles, studies and investigations on socio-political topics connected to the mass media and social networks, populism and far-right radicalisation, conspiracy networks, racism, feminism, artificial intelligence, hate speech, and discrimination, both academically and for the wider public, for plaforms including Libertatea, Vice, Revista Vatra, Gazeta de Artă Politică, OpenPolitics, Pagini Libere, CUTRA, and Baricada.

This event is organised by the Salonul de proiecte Association as part of the project Images and Words in Circulation: A Critical Approach / Image, press, and public space. 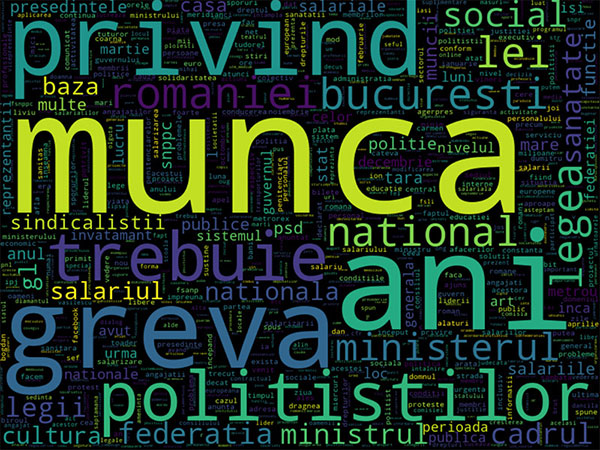