Artistic intervention in the EXPO_02_GEN exhibition

Matts Leiderstam is the artist invited to create the second work in the EXPO_02_GEN series, drawing on materials from the Mihai Oroveanu Image Collection. Created specially for the occasion, his work focuses on a single image from the archive, to be found in the “Fashion” category. Searching through the files of scanned photographs placed at his disposal, Leiderstam identified this particular image in two versions: two mirror-image scans of the same negative. He decided to use both versions in order to highlight the geometric composition that results from combining them. Laying a grid over the photographs, he reveals the structure of the image, but at the same time makes us conscious that the camera viewfinder itself imprints a grid on the world. He thereby links the pictorial to the photographic device and emphasises the fact that today we have all become image editors on our telephones and laptops. The more intensely a photographic image is subjected to processes of transfer, archiving and interpretation, the greater the distance between us and the context of its production. The crucial elements connected with the moment of its production become increasingly diffuse or are completely erased, while new events and circumstances gain ground and generate yet further interpretations and speculations.

Leiderstam's contribution consists of a series of drawings on printed images accompanied by a text that sets out from the few items of information that he has been able to discover about the image in question. When viewed together, text and photograph, having been subjected to the multiple analytic interventions of the grid that scores its surface, merely heighten the enigma of the original moment of production, without in any way being able to discover the vectors that converge on that event or point of encounter that constitutes the photograph. Rather than making anything explicit, the few contextual data create yet further puzzled questions as to the female character found in the image, the public sculpture in her immediate vicinity, the subsequent fate of the work, the author of the photograph. The visual mechanism of knowing and controlling the world, the foundation of modern representation by means of the image in Western culture – the grid – thereby reveals the illusory ability to reach the truth.

Matts Leiderstam (b. 1956) is a visual artist based in Stockholm that seeks out stories connected to the act of making images. Most of his works can be described as growing out of a very simple question: What does an image do? His works are often made ‘after’ older practices, in conversation with art history, its materials, and circulation – investigations that frequently had led him into museum storages and archives. Leiderstam is currently working on a research project, with support from the Swedish Research Council, and as an external tutor at the Malmö Art Academy. Prior to that he held the position as Professor in Fine Art between 2011-2018 and 1997-2001 and obtained a PhD in Fine Arts in 2006, at the same institution. Selected solo presentations: Andréhn-Schiptjenko, Paris (2021) & Stockholm (2018); Wilfried Lentz, Rotterdam (2017); Kunsthalle Düsseldorf (2010); Grazer Kunstverein (2010); Salon MoCAB – Museum of Contemporary Art, Belgrade (2008); Badischer Kunstverein, Karlsruhe (2007); Kunstmuseum Liechtenstein, Vaduz (2006); Magasin III, Stockholm (2005).  Selected group shows: Borås Art Museum (2020); Art Encounters Biennial, Timișoara (2019); Tensta Konsthall, Stockholm (2018); The 11th Shanghai Biennial (2016); The National Gallery, Prague (2016); Fondazione Prada, Milan (2015); Heine Onstad Kunstsenter, Oslo (2015); 8th Berlin Biennale (2014); Gasworks, London (2014); Museo Tamayo, Mexico City (2013); Witte de With, Rotterdam (2011); Göteborg International Biennial for Contemporary Art (2011); Moderna Museet, Stockholm (2010); Third Guangzhou Triennial (2008).

The exhibition EXPO_02_GEN / A selection from the Mihai Oroveanu Image Collection brings together a wide range of techniques that shed light on the evolution of the photographic medium, from glass plates and film negatives, now scanned for the most part for the first time, to original prints made by photographic studios active in Romania between the late-nineteenth century and the mid-twentieth century, from carefully choreographed official photographs that control the manner in which their subjects are presented to vernacular improvisations in which the freedom of movement in front of the camera is incomparably greater. The selection unfolds like a montage, which brings together themes and typologies linked by visualisation via photography of the gender question, while on the other hand, putting forward unexpected juxtapositions that confound expectations, destabilise meanings that are culturally embedded, and stimulate the interpretative mechanism of each individual viewer.

The exhibition can be visited until July 4, 2021, the guided tours will be announced in advance on social media.
*Visiting hours may differ due to COVID-19 restrictions, please check on social media for updates. 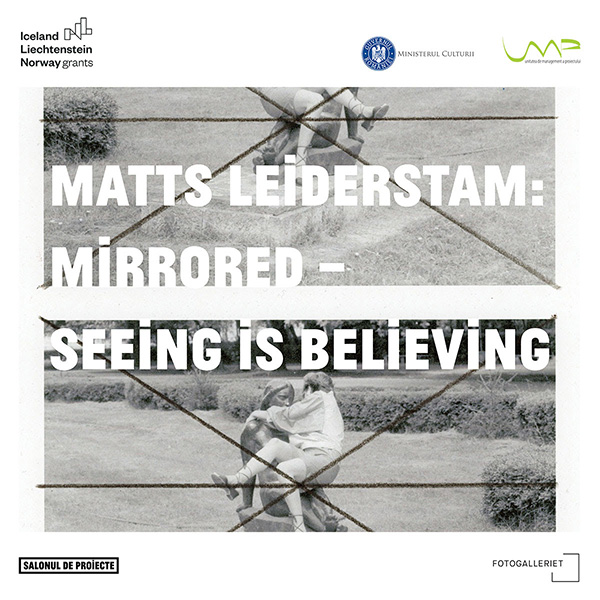