This encounter is the third event featuring several new productions included in the exhibition Displacement and Togetherness (2019), organized by Salonul de proiecte at the Strombeek Cultural Center in the framework of the Europalia Festival. Iulia Toma’s new work will be on display for one evening and the public will have the opportunity to engage in a casual conversation with the artist.

Iulia Toma uses embroidery as a medium for drawing on fabric. Her sewing-machine stitched portraits depict women, men, and children who have recently been forced to flee their homeland due to civil war, political unrest, and economic struggles. The monumental work Migration of Memory / Memory of Migration is part of #orientalswelcome, a long-term project through which the artist explores the increasingly fearful and hostile attitude towards immigration. The Romanian National Council for Refugees in Bucharest assisted the artist in contacting several refugees, the majority from Syria, Afghanistan, and Iran who accepted to share their stories about their background and their current situation in Romania. The textile fresco departs from a series of talks and interviews but abstracts the narratives and highlights various motifs and topics, which are inserted following a mutual agreement between the artist and her interlocutors. The subjects are caught between on the one hand the traumatic memory of military conflict and displacement, and on the other the experience of longing for their former lives, contemplating their unfulfilled possibilities. 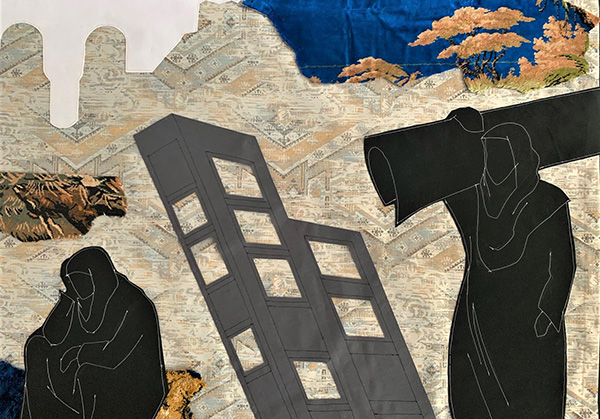