Nicoleta Moise and Luiza Vasiliu will engage in a conversation about Art and Journalism: Images and Words in Collaboration, a research project by Nicoleta Moise conceived around the similarities and differences between artistic practice and journalism. Together they will discuss how artists employ and adopt journalistic research techniques (documents, photographs, video, interviews, archives, diaries, etc.) when they tackle social and other topics. The project stems from Nicoleta Moise’s own artistic research methodology and aims to create bridges for collaboration between art and journalism in a context in which press freedom and journalist safety are steadily decreasing against the backdrop of a political situation that is succumbing to authoritarianism and dictatorship.

Luiza Vasiliu has worked as a reporter at Casa Jurnalistului where she published in 2016 an investigation about the medical doctor Gheorghe Burnei. She has collaborated with various newspapers and media outlets including Suplimentul de cultură, Decât o revistă, Regard, Courrier International. She translated into Romanian authors such as Gide, Vian, Reza, Ronson. From 2016 she edits the cultural platform Scena9.

Nicoleta Moise is an artist and journalist. Through the use of archive material and entangled narratives, her practice is focused on making visible less known stories, characters or events, which requires time and longer, careful work. A selection of her projects include Memory of the World (2021), s+s=bff, The League of Gorj Women (2020), I Am Not Entirely Happy Unless I Am Here, In My Country (2016) and Not only the seaside, but I like the mountains too! (2014).

This event is organised in the framework of the exhibition The Cipher of the Vast Planetary Rumour, opened between June 8 – July 17, 2022, at Salonul de proiecte, as part of the project Images and Words in Circulation: A Critical Approach / Image, press, and public space. 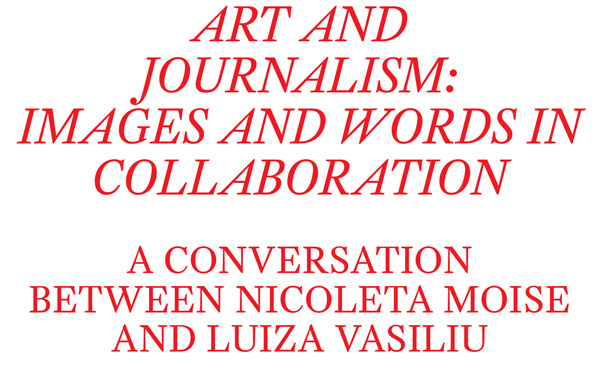