Screening and conversation with Jimmy Robert

On the occasion of the exhibition Displacement and Togetherness (2019), organized by Salonul de proiecte at the Strombeek Cultural Center in the framework of the Europalia Festival, several artists were invited to produce new works. Focused on the topic of migration, the exhibition was not just about one territory or one nation state, but rather about encounters and transfers, about mobility as a defining trait of our age, which can be both brutally imposed and liberating, about unearthing histories and challenging deeply-entrenched dichotomies. The video Cruising by Jimmy Robert will be presented in Bucharest for the first time, part of a series of events featuring several new productions included in Displacement and Togetherness and encounters with the artists.

For a few years Jimmy Robert resided in Bucharest and became interested in a very emblematic area of the city, one that encapsulates both the urban transformations brought about by the terminal years of the socialist regime and the regressive ‘developments’ of the post-socialist decades, which prompted, among other things, the resurgence of religion in the public sphere. Robert stages a performance that features six performers, including the artist, enacting various choreographic vignettes, along the route between The House of People—one of the largest edifices ever built, Nicolae Ceaușescu’s megalomaniac master project, erected in the 1980s, which nowadays houses the Romanian Parliament—and the Cathedral of National Redemption, the biggest orthodox church in the country, which was officially inaugurated last year, but has yet to be finished. The Cathedral was built in the immediate vicinity of the House of People, and the two poles are facing each other in a disquieting proximity, projecting their intimidating presence onto the public realm. The subtitles add yet another layer to the complex temporality of the House of People, featuring excerpts from an interview given by its architect, Anca Petrescu, to PIN-UP magazine in 2006.

Jimmy Robert was born in Guadeloupe (FR) in 1975 and currently lives and works in Berlin. His multidisciplinary practice encompasses performance, photography, film, video and drawing, frequently collapsing distinctions between these mediums. The interest in the body personified through materials and the reverse, as well as the breakdown between image and object, integrates Robert’s longtime work with performance with his larger practice. He has choreographed performances within the context of the exhibition space or in relation to existing architectural structures; as well as re-staging, reframing or sampling historical performance from Yoko Ono, Yvonne Rainer, James Lee Byars and others. Robert’s performances have been presented at the Chicago Architecture Biennale (2019), KW Institute for Contemporary Art, Berlin (2019), Performa17, New York (2017), Migros Museum, Zurich (2015), MoMA, New York (2014). 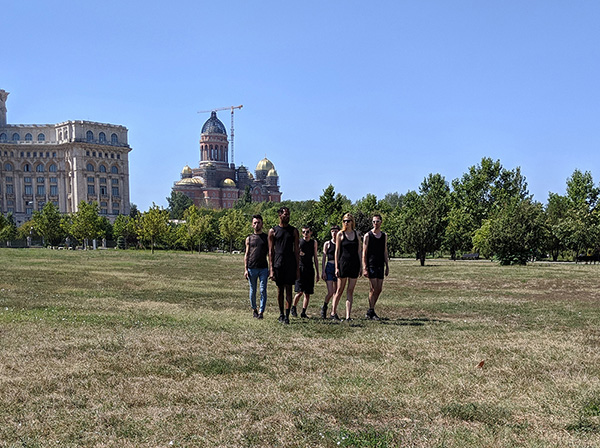