This encounter is the second event featuring several new productions included in the exhibition Displacement and Togetherness (2019), organized by Salonul de proiecte at the Strombeek Cultural Center in the framework of the Europalia Festival. The artist duo Silvia Amancei and Bogdan Armanu produced two new works which explore various aspects related to the issue of economic migration—one of the most prominent social phenomena that mark the post-socialist period in Romania. Romania exports cheap labour to Western Europe and imports cheap labour from its Eastern neighbours and Asia, taking advantage of the lack of legal protection in the case of the latter. In the long run, this strategy doesn’t offer any social and economic stability, while the gap between the rich and the poor widens. The exploitation and subjugation of migrant workers must be seen as a global problem and a direct result of capitalism and its postcolonial tactics.

Taking into account the economic and social turmoil of post-socialist Romania, the mass migration that continues to date and the emergence of the neoliberal turbo-capitalist discourse that tends to become dominant, the installation (How to) Migrate Towards the Future? uses marketing tools to inject alternative progressive viewpoints into the mainstream flow of information. The collaboration with Cătălin Moroșanu—who is at once a famous kickboxer, a showbiz personality and a political figure—is intended to help research the issue of economic migration in Romania (with a focus on the Moldova region), while seeking to stimulate progressive critical thinking through the symbiotic relationship between art and pop culture, in an effort to fight against the rise of neoliberal nationalism.

The production of the artworks as well as a research residency at De School van Gaasbeek (BE) were supported by the Romanian Cultural Institute.

Silvia Amancei and Bogdan Armanu live and work in Iași, Romania. They graduated from the George Enescu National University of Arts in Iași (Faculty of Visual Arts and Design). Their artistic practice is situated on the interface of social studies and contemporary art; they explore how art can be turned into a tool to stimulate the ability to look beyond capitalism and create a (common) future. Selected exhibitions: If Then What After, Kunstverein Baden, AT (2019), What Past? What Future, Katholische Privatuniversität Linz, AT (2017), When Atoms Collide and Disturb Entropy, Electro-Putere, Craiova, RO (2017), Return to Spaceship Earth, Salonul de proiecte, Bucharest, RO (2017), Depression, Uncertainty and Other Symptoms of Mortality, Galeria OFF, Lodz, PL (2016), In Search for Causes and Realities and Constellations of Desires, Galeria apARTe, Iași, RO (2016), Appearance and Essence, 1st Art Encounters Biennale, Timișoara, RO (2015). 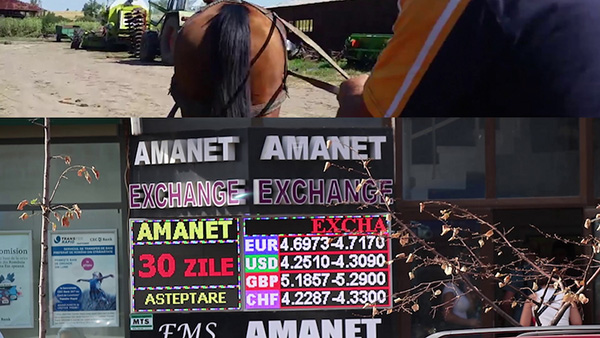