In A clean line that starts from the shoulder, Jimmy Robert explores the relationship between lines, movement, and form. Androgyny and the vulnerability of the body are central themes in Robert’s works. They are often based on existing artworks, to which he adds new layers of meaning. The piece that will be presented at Salonul de proiecte is conceived as a guided tour of both the exhibition and the performance Jimmy Robert had at M - Museum, Leuven, in 2015. For this project, he used the work of the Romanian-Belgian artist Idel Ianchelevici (1909-1994), the Belgian artist Lili Dujourie (1941), and the Dutch conceptual artist Stanley Brouwn (1935-2017), as well as quotes from fashion magazines published in the seventies, such as Vogue, which refer to lines, movement, and the body.

Jimmy Robert is an artist born in Guadeloupe, currently living and working in Bucharest. His multidisciplinary practice encompasses performance, photography, film, video, and drawing, frequently collapsing distinctions between these mediums. He has choreographed performances within exhibitions or in relationship to an exiting architecture, as well as restaging, reframing, or sampling historical performances from Yoko Ono, Yvonne Rainer, James Lee Byars, among others.

A clean line that starts from the shoulder is part of EVENING CLASSES: Actions by Day and by Night, a program conceived by Manuel Pelmuș, focusing on the connection between the different temporalities and modes of attention to be found in dance and the visual arts, as a way of reflecting on the economies and possibilities produced by this potential hybrid space. For more info please check: https://salonuldeproiecte.ro/projects/ 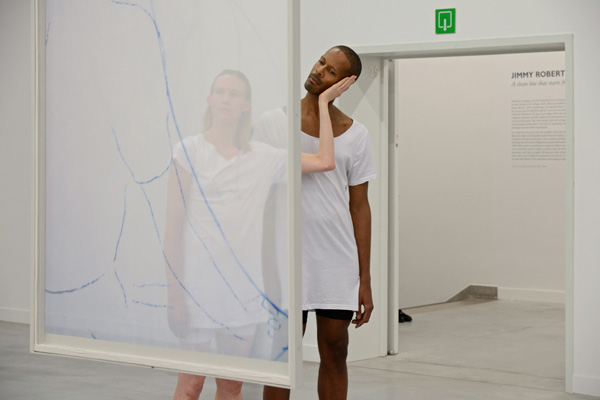