OUTSIDE THE PALE BLUE DOT (BEYOND THE PLANET EARTH)


Konstantin Eduardovich Tsiolkovsky (1857 – 1935), the Russian scientist and pioneer of space exploration, set his science fiction story Outside the Earth/Beyond the Planet Earth in the year 2017. The story is representative of Tsiolkovsky’s work as a whole, which combines a fuselage capable of withstanding the pressures of scientific accuracy with the dizzying leaps and dives (Walter Benjamin’s Rausch) characteristic of pop culture’s Lunapark. With Outside the Earth/Beyond the Planet Earth, the bold ideas of a long line of Russian Cosmism authors, which otherwise would have remained merely schismatic, divergent, strange, even repugnant, arrived in Romania almost unaware: in synchronicity with the launch of Sputnik (in turn synchronised with the hundredth anniversary of Tsiolkovsky’s birth) and via the broad channel known as C.P.S.F. [The Collection of Science-Fiction Stories], aimed at a mass fandom which we might today call proto-geek or pre-nerd.

This year is also the hundredth anniversary of the Great October Socialist Revolution. Surprisingly, in his utopian story written before 1917, Cosmist visionary Tsiolkovsky did not foresee the key event that would later make it possible for mankind to take the first step outside/beyond Earth (via the Sputnik satellite, launched by the Soviet Union in 1957). On the other hand, Tsiolkovsky’s role in imagining life under extra-terrestrial conditions (with all the technical details connected to the construction of greenhouses and floating gardens in space, as well as the promotion of vegetarianism) remains indisputable, likewise his role in imagining the acclimatisation of the divers-cosmonauts-workers in interplanetary working environments and the orbital spa resorts he proposed.

This discussion is the first in a series of events organised by Salonul de proiecte that will look at the legacy of Tsiolkovsky. Taking as its starting points an excerpt from the film Gagarin’s Tree. An Interview with Ovidiu Țichindeleanu by artists Mona Vătămanu and Florin Tudor and E.T.E. – Extra-Terrestrial Ecologies, a lecture-performance by Ralo Mayer, the discussion will revolve around questions relating to colonisation, ecology, the ruins of past utopias, such as the Yuri Gagarin Youth Centre in Chișinău and Biosphere 2 in Oracle, Arizona. Connections form beyond time and space, between Gagarin’s tree and the sequoia of E.T., Hitchcock, and Chris Marker, in the very moment when the progressive, solarpunk vision of the October Revolution seemed to have been completely eclipsed, shipwrecked far from home.

The title of the event plays on the nuanced translations of the title of Tsiolkovski’s story, emphasising the growing (concrete and/or metaphysical) distance from an image of Earth which we find increasingly difficult to identify with. Pale Blue Dot is a photograph in the Family Portrait series made by the Voyager 1 space probe just before leaving our Solar System, in which the Earth appears no larger than a pixel. The image captures, from outside, from beyond, from a distance of six billion kilometres, the final instant in which the Earth is visible. During a lecture at Cornell University, Carl Sagan, at whose initiative this final image of Earth viewed from deep space was recorded, used it to situate within a single vanishing point all the hopes, misunderstandings, false privileges, religions, ideologies, economic doctrines, “every saint and sinner” in the history of our species:

“Our planet is a lonely speck in the great enveloping cosmic dark. In our obscurity, in all this vastness, there is no hint that help will come from elsewhere to save us from ourselves.” (Carl Sagan, 1994)

Ralo Mayer (b. 1976, AT) is an artist living and activating in Vienna, presently teaching at the Department of Site-Specific Art, University of Applied Arts Vienna. His works delineate “ecologies of contemporary history,” exploring the relation of nature and society as a collapsing dichotomy. Objects like space shuttles, artificial ecosystems, the everyday life of post-Fordism, and digital cultures interweave into meshes of past futures and today’s science fiction, which Mayer translates into cross-media ensembles of installation, film, text, or performance. Ștefan Tiron (b. 1976, RO) lives and works in Bucharest. Since 2005 he has been activating as curator and also contributing with texts and works to many projects, exhibitions, and magazines across Romania and Europe. He is the founder and co-curator of the Space Agency for Nocturnal Journeys to the Origins of the Universe (2006 – 2013), a series of art and science “wonder-shows” taking place in galleries, regional natural history museums, universities, private homes or former clinics. Ovidiu Ţichindeleanu (b. 1976, RO) is a philosopher, translator, and culture theorist living in Chişinău (MD) and writing on critical social theory, decolonial thought, intercultural philosophy, Eastern Europe, and the cultural history of postcommunism. He studied philosophy in Cluj, Strasbourg and Binghamton (PhD in Philosophy, Binghamton University, 2009) and since 2012 he has been teaching at the Decolonial Summer School of University College Roosevelt (University of Utrecht) in Middelburg (NL).

Image: Detail of a page from Konstantin Tsiolkovski’s 1933 manuscript Album of Space Travel 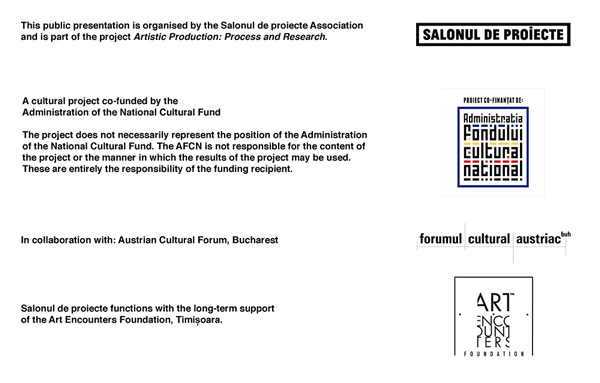