The reception of Constantin Brâncuși in the public space and local mentality has been a subject followed with interest by both Salonul de proiecte and Dan Perjovschi in recent years. The first collaboration on this theme with Dan Perjovschi took place in 2015: The Sons and Daughters of Brâncuși. A Family Saga exhibition that Salonul de proiecte organised as part of Timișoara Art Encounters. Two years after the failure of the Brancusi Is Mine campaign, we are happy to host this event whereby Dan Perjovschi brings back into discussion the Wisdom of the Earth and its recent history. The sculpture has vanished from the public eye and we no longer have access to it. The political capital gained at the time by a number of public figures has also vanished. Instead, we are left with money frozen in the accounts of the Ministry of Culture and the memory of the Government building draped with a pompous banner that juxtaposed the sculpture and the national flag, the artist and the country.

Below, Dan Perjovschi provides a few details of his project and he will be present at the opening scheduled for September 6 between 15.00 and 19.00:

“In 2016, during the Wisdom of the Earth. This Is Not A Stone exhibition at the National Museum of Art in Bucharest, I collected 1,514 lei from visitors. At the end of the exhibition, I deposited the money in the Ministry of Culture account specially set up for purchase of the work.

Unfortunately, the national subscription was a failure, even though people donated more than a million Euros. The reasons are multiple, stupid, and frustrating. The Wisdom was not purchased. The masterpiece is not public.

I campaigned, talked, drew, posted, quarrelled, and donated to the project. To me, the Wisdom was/is a smaller Cathedral.

I personally invited you to deposit money in the glass display case that once housed the artwork. Your money, my responsibility. Two years on, it still isn’t clear what has happened to the donations. Mumbling, bureaucracy, the dark night of the mind...

I’m not going to wait any longer. I’m going to return all the money collected.

Come and take back what you donated. 50 lei, 10 lei, 1 leu. If you can’t remember, make a genteel guess. With a few exceptions, I can’t remember who donated what. I’ve no way of checking.

This event is organised by the Salonul de proiecte Association, with the support of the National Museum of Art of Romania. 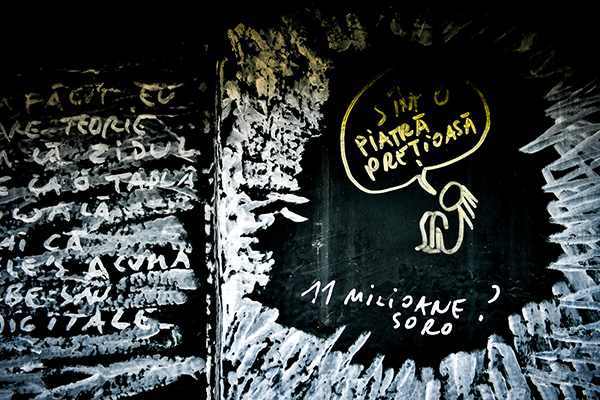