EVENING CLASSES
Actions by day and by night
April – May, 2018


Following on from the two previous seasons in 2014 and 2016, Salonul de proiecte has invited Manuel Pelmuș, one of the leading artists in the “new performance turn,” to conceive a further iteration of the Evening Classes program. Over a period of six weeks, he will be bringing together artists, curators and theoreticians to discuss, perform and relate to the topic of living bodies in the exhibition context.

For Manuel Pelmuș, the term La seral [Evening Classes] holds a very particular historical and personal meaning. During Romania’s communist period, Seral meant evening classes for pupils who had dropped out of school and entered employment, and which allowed them to finish their education. The Evening Classes format had a poor reputation, but Pelmuș remembers being fascinated by the possibility of going to school at night rather than during the day. He finds a strong correlation between the nocturnal theatre convention and the diurnal gallery or museum space, as played out in the current transfer of live bodies from black boxes into white cubes. Over the last decade, the increasing presence of dancing bodies in museums and exhibition spaces and the art world’s fascination with dance have been the subject of numerous debates. Therefore, for this edition of Evening Classes, Pelmuș has decided to focus on the connection between the different temporalities and modes of attention to be found in dance and the visual arts, as a way of reflecting on the economies and possibilities produced by this potential hybrid space.

“Dance in the museum is here to stay!” ”What are you going to do when this dance-in-the-museum trend is over?” “They need us more than we need them!” “Dance and dance-related practices in an exhibition context show without telling much.” “The traffic between dance and the museum is one-way, and always on the museum’s terms.” “Museums can offer incredible opportunities for rethinking the context of choreography—formally and historically, but also socially and politically.” “A presentist spectacle—a way to enliven its mausoleum atmosphere and cater to the demands of an experience economy.” “Dance in museums. We’ve been getting such short shrift, and some sweet day we’ll be a part of all of this. Maybe.” “Dance in the museum challenges and changes the institution in fundamental ways.” “It’s just so much fun!” “The contemporary museum demands a dematerialised but omnipresent art, an art that is a continuous event or ongoing performance.” “Performance makes us aware that meaning takes place in the present.” “Artistic occupation is being redefined as permanent presence. The economy of art is deeply immersed in this economy of presence.” “Dance as a new field of discourse and thinking.” “It is no accident that the museum today is hysterically looking for activational artistic bingabonga.” “Dance provides an opportunity to reinvent the format of the exhibition.” “The difficult question here is: How can museums also be places of production instead of harvesting (or even worse, co-opting) all that is most experimental and excellent in contemporary dance, produced on the poor margins of theatre production, for the sake of presentation in the museum and the neoliberal demand for audience/visitors development?” “The museum is a fundamentally choreographic endeavour.” “The reason why museums today are interested in dance and choreography is not because curators have suddenly become dance lovers but because they have no choice.” “The museum will become a place for mental and even bodily exercise, exploring performance as a public sphere.” “Dance might be the art that best epitomises forms of labour and life today—immaterial, conflated with the production of one’s own subjectivity, self-exploitative, unworked or inoperative (désœuvré) but also all the more pleasurable for that poverty—whereas choreography stresses the design of procedures that regulate a process.” “Performance may have crossed from the shadows to the brightly lit white cube spaces but it continues, by stealth, to carry its potential for transgression and transformation.” “Budgets and performers’ fees are rarely mentioned, not to mention artists’/choreographers’ fees, or the price of such works as have become ‘collectable’ in part through the labour of the dancers and other performers who actualise them time and again.” “After all the people get jobs, we invest the budget in performers’ salaries!” “Most performers get 300 euros for a week of performing (including rehearsals). I wonder when will we all collectively say no!” “Darling, my next public programme will be very performative!”

The above quotations are statements that Pelmuș collected over a six-year period, while working as a choreographer within the exhibition context. They were first published to mark the tenth anniversary of the Leuven Playground Festival. The quotations, which he keeps anonymous, touch upon a number of pressing issues relating to the recent “performance turn,” which has guided his conception of this program: the history and specificity of both fields, their economies, politics, modes of production, temporalities, relation to new technologies, institutional histories, and the challenges opened up by the ongoing performative turn.

For updated details of the events please check:
https://www.facebook.com/salonuldeproiecte/ 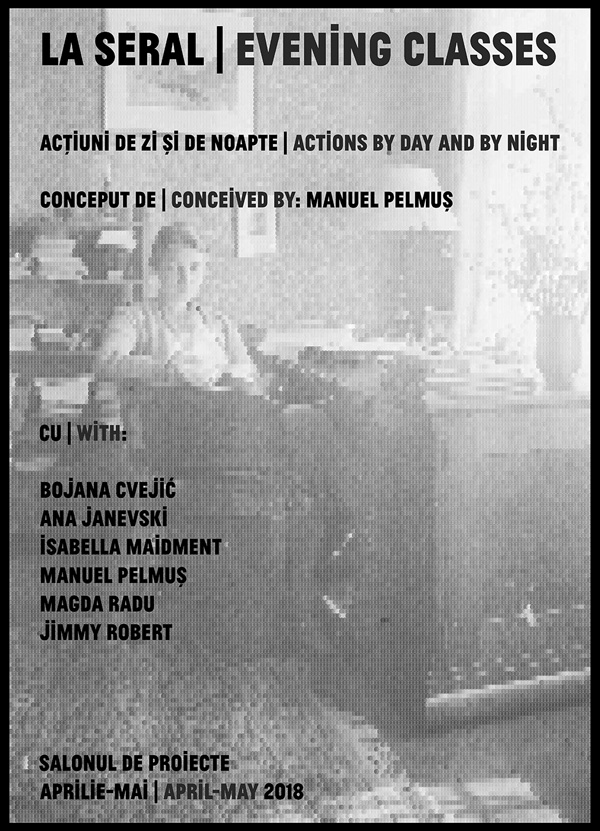 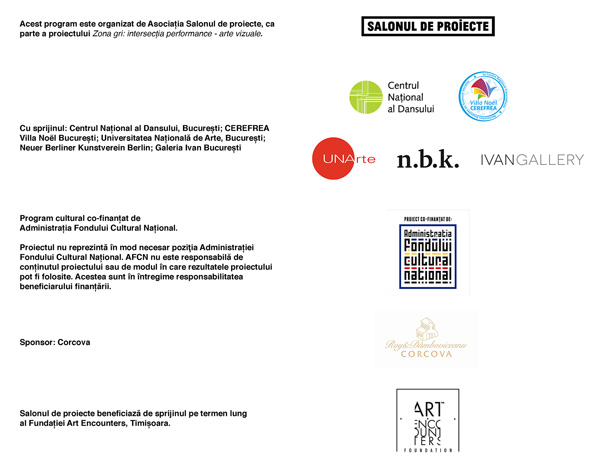